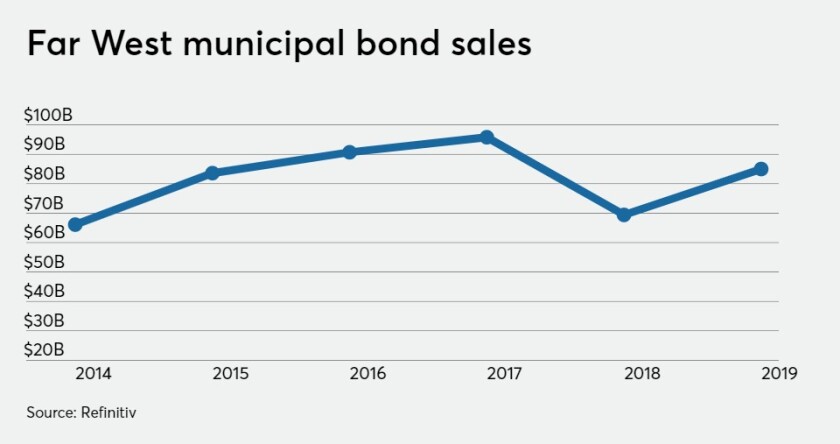 Issuers in the Far West sold $85.09 billion of municipal bonds in 2019, according to Refinitiv data, a 23% year-over-year increase helped by increasing adoption of taxable refunding structures.

“I think people were pleasantly surprised by the growth in the second half of the year driven by low rates,” said Raul Amezcua, a managing director with Stifel Financial Corp. “It’s a pretty bold improvement from the trough we had in 2018. That was brutal, the volume drop we had. We bounced back in 2019 and are on target in 2020 to exceed 2019 volume.”

The nine-state region experienced 41% growth in bond volume in first quarter, then dropped 31.4% in second quarter, and then rebounded climbing by 50.8% in third quarter and nearly 60% in the fourth quarter compared to 2018, according to Refinitiv.

Refundings have been a major driver of the region’s bond volume for several years as interest rates have remained low.

Volume in the region dove 27.7% in 2018 to $69.4 billion as issuers adjusted to the first year without advance refundings, which were eliminated in the federal tax bill approved by Congress in December 2017.

“Before tax reform in 2017 everything was dominated by tax-exempt refundings,” said Amezcua. “Then in 2018, everything changed dramatically. New money exceeded refundings in 2018.”

“With the stock market volatility, the coronavirus and the Federal Reserve expected to make cuts, I expect 2020 will be even stronger than 2019,” Amezcua said.

The Fed futures rate has a 40-basis-point cut assumed in it, and the market is clearly saying it expects the Fed to cut rates twice in 2020, he said.

“No one sees rates going up with the slowing economy and the feeble recovery,” Amezcua said. “It’s the longest recovery we have had and also the weakest.”

Also unique to 2019 was growth in competitive deals, which grew by 48% to $16.6 billion, while negotiated deals grew by a lesser 17.7%, but still represented the vast majority of deals at $64.5 billion.

Sales through the California State Treasurer’s office soared to $9.4 billion in 2019 compared to $6.2 billion the prior year, spurred by $6.2 billion in refundings, according to Tim Schaefer, deputy treasurer for public finance.

He attributes the increase in refundings by the state to ripples produced by bond sales that occurred in 2009 reaching their 10-year call date last year.

“In Spring 2009, the nation was plunging into the Great Recession,” Schaefer said. “We were working off significant overhangs of unsold debt to put money on the street to encourage commerce and development in California.”

Spin forward 10 years, and the state had a lot of outstanding maturities to choose from that could be sold in a market with significantly lower interest rates, Schaefer said.

For state government, Schaefer expects that refundings will fall in 2020, if the state’s bond sales a decade ago are any indication.

Bond volume was just north of $10 billion in 2010, half of what it had been the prior year, Schaefer said. In 2009, the state had pushed to take the authorized, but unsold bonds, to market as quickly as possible to get infrastructure projects going to jump-start the depressed economy, he said.

California’s taxable bond volume also depends on the needs of the state’s $80 billion high speed rail project that aims to connect Los Angeles to San Francisco. On years when that project needs funding from bond sales, the state’s taxable sales are going to be higher, Schaefer said.

Though the state has done it, Schaefer said the treasurer’s office is not a big fan of what he calls the unusual two-step refinancings involving taxables whereby tax-exempt debt is refunded using taxable bonds, and then taxables are left to sit, later to be taken out with tax-exempt debt.

With that said, if the market is permitting issuers to take out tax-exempt debt with taxables at a lower rate of interest, and that is significant, and of benefit to the people of California, “I will tell you with a high level of confidence this treasurer will say, ‘We should do it,’” Schaefer said.

Sales by issuers in Washington fell 0.8%, but the state still had the Far West’s second largest bond volume at $9.1 billion.

Washington State Treasurer Duane Davidson has been recommending the state reduce the amount of debt it issues, by operating more on a pay-as-you-go basis, since he was elected treasurer in 2016. He has found changing habits at the state more difficult, however, then when he was a county treasurer, he said.

“I now realize I need to take a different tack,” Davidson said. “We have a number of freshman legislators working on different issues of primary importance to them, and state finances might not be a priority.”

He sees his role as treasurer to educate the public, so they fully understand the state’s debt.

“We are a fairly leveraged state,” Davidson said. “I have been stressing that our debt should be at a lower percentage relative to general revenues, which would put us in a better position in an economic downturn.”

Education-sector issuance fell 13.4% in Washington, but still represented the largest category at $2.3 billion, general purpose grew by 79% to $2.1 billion and transportation grew by 76.4% to $1.4 billion.

Montana and Nevada were the only other states that experienced declines with volume falling 4.6% to $766 million and 2.2% to $3.7 billion, respectively.

Nevada sold nearly half of its bonds, a hearty $1.9 billion, in the fourth quarter, the only quarter it saw volume grow.

Oregon, Wyoming and Alaska experienced the greatest percentage of volume growth with all three nearly doubling sales to $6.8 billion, $333.7 million and $917 million, respectively.

State government sales doubled across the region hitting $13.7 billion in 2019 compared to the prior year. Colleges and universities in the Far West saw sales drop 37.8% to $2.1 billion.

The top three rankings for senior manager, financial advisor and bond counsel have remain unchanged since 2017.

BofA Securities topped the regional senior manager table, credited by Refinitiv with $11.8 billion on 76 deals. Citi trailed with $11.2 billion on 93 issues, followed by $9.6 billion on 107 issues for Morgan Stanley.

Public Resources Advisory Group led the rankings of financial advisors, credited with $14.6 billion on 44 issues. PFM came in second with $14 billion on 172 issues. KNN Public Finance came in third with $6.4 billion on 72 issues.