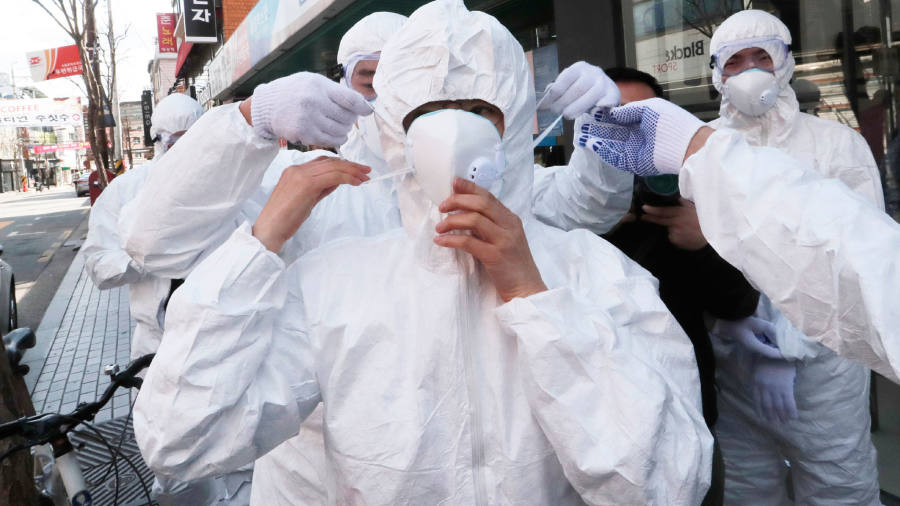 The Taiwanese government on Thursday presented a draft NT$60bn ($2bn) special budget to prop up financing for its fight against the coronavirus outbreak and mitigate the economic blow from the epidemic.

The massive support package, which is expected to be approved by parliament next week at the earliest, comes as Taipei prepares for the risk of large local outbreaks as seen in South Korea, Japan or Italy.

Su Tseng-chang, premier, announced that the government was raising the epidemic response to the highest level – a move that allows for more drastic measures such as limiting access to hospitals and lifts administrative responsibility for epidemic management to the top levels of government.

“Since the international epidemic is becoming more serious by the day, Taiwan must also strengthen its defence against the virus,” said president Tsai Ing-wen. “We have decided to get ready in advance.”

While the opposition had pushed for raising the response level for several days, the government had earlier been reluctant to do so, out of concern that this could trigger panic among the public.

So far, Taiwan has managed to avoid an uncontrolled spread of the virus. It has 32 confirmed cases and one death. 13 of the country’s confirmed cases are local infections and belong to three different family clusters. The authorities have been able to identify the source of infection, and are closely tracking all contact persons.

From the economic support package, NT$16.9bn is earmarked for vaccine and drug research, expanding isolation wards in hospitals, buying more protective gear and test kits, and quarantine-related compensation and subsidies.

The package includes another NT$16.8bn for subsidies to the hard-hit transport and tourism sectors. Moreover, the government intends to spend some of the funds to promote sales of Taiwanese agricultural and fisheries products and boost domestic consumption through various events and vouchers.