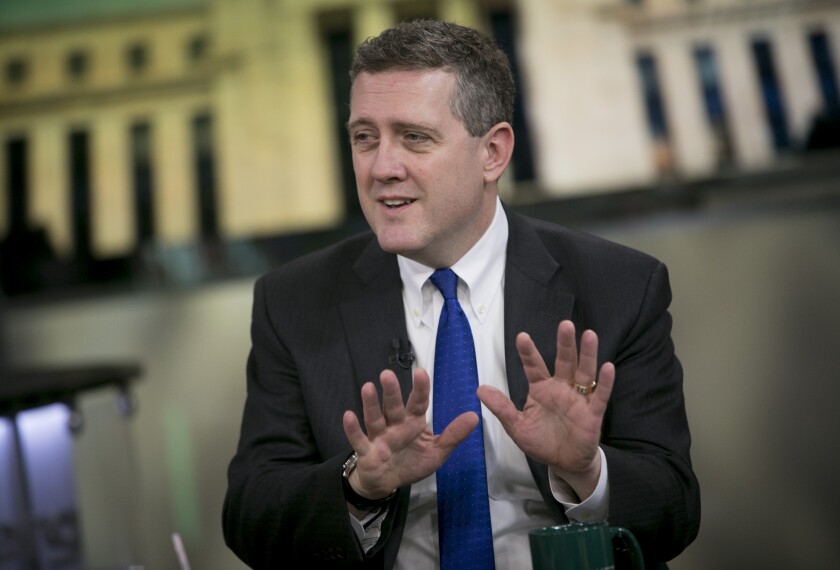 Federal Reserve Bank of St. Louis President James Bullard said the Fed is ready to act if the COVID-19 virus develops into a destabilizing force on the world economy.

Speaking to the Fort Smith, Ark., regional chamber of commerce on Friday, he said while COVID-19 cases appear to be contained in China, more cases are being reported globally. Global economic growth is likely to slow temporarily, he said, but much of the slowdown will be centered in Asia.

Bullard said the Federal Open Market Committee is in a good position because previous policy rate cuts were designed to insulate the economy from adverse shocks.

“Longer-term U.S. interest rates have been driven lower by a global flight to safety, likely benefiting the U.S. economy,” he said. “Further policy rate cuts are a possibility if a global pandemic actually develops with health effects approaching the scale of ordinary influenza, but this is not the baseline case at this time.”

“The FOMC executed a marked turnaround in U.S. monetary policy during 2019 that was designed in part to insure the economy against possible negative shocks to growth.”

He added, “this has put the FOMC in a good position in early 2020 as we closely monitor the evolving coronavirus impact on the global economy.”

Policy moves take time to work through the economy, Bullard noted, so last year’s rate cuts are likely to continue to have an influence as the virus tragedy unfolds.

Bullard has previously argued the adjustment to monetary policy during 2019 was much larger than commonly appreciated. He pointed out the change in monetary policy contributed to a reduction of 165 basis points in the two-year Treasury yield from Nov. 8, 2018, to Jan. 31, 2020.

COVID-19 has been associated with a global flight to safety, pushing longer-term U.S. yields to exceptionally low levels.

“This is a bullish factor for U.S. economic growth above and beyond the declines in yields associated with the 2019 change in direction for U.S. monetary policy,” Bullard said. “Experience with previous viral outbreaks suggests that the effects on U.S. interest rates are tangible and last until the outbreak is clearly contained,” he said.

Univ. of Michigan Index rises in February
Consumer sentiment rose to 101.0 in February from 99.8 in January and 93.8 in February 2019, according to the University of Michigan’s survey of consumers released Friday.

When describing the reasons for their expectations, 8% of respondents surveyed mentioned the COVID-19 virus. However, during the last two days of polling, 20% mentioned the virus, as equity prices plunged amid CDC warnings about the potential domestic threat.

“While too few cases were conducted to attach any statistical significance to the findings, it is nonetheless true that the domestic spread of the virus could have a significant impact on consumer spending,” the university said in a release.

“Importantly, the early indications suggested only a very modest impact as the sentiment index among consumers who mentioned the coronavirus was still quite high (just over 90.0). If the virus spreads into U.S. communities, consumers are likely to limit their exposure to stores, theaters, restaurants, sporting events, air travel, and the like. There is likely to be some advance buying and increased online shopping, but much of the discretionary spending may not occur.”

Chicago index rises in February
The Chicago Business Barometer rose 6.1 points in February to 49.0, its highest level since August.

The index, which is produced in conjunction with MNI, moved closer to the 50-no-change-threshold, shifting the three-month average up to 46.7.

Among the main five indicators, production and supplier deliveries showed the greatest gains, while employment was the only one to decline.

The production index rose to 51.0, hitting an eight-month high. The index shifted back into expansion following seven straight months below 50. The new orders index strengthened to 49.1, its highest level since August.

After dropping to a four-year low in January, the order backlogs index rose slightly to 38.2 in February. However, the index remained in contraction since September. The inventories index hit a six-month high of 48.1, although recording the seventh sub-50 reading.

Employment slipped to 44.5, slipping 2.4 points to the lowest level since July.

Wages and salaries, the largest component of personal income, rose 0.5% after increasing 0.1% in December.