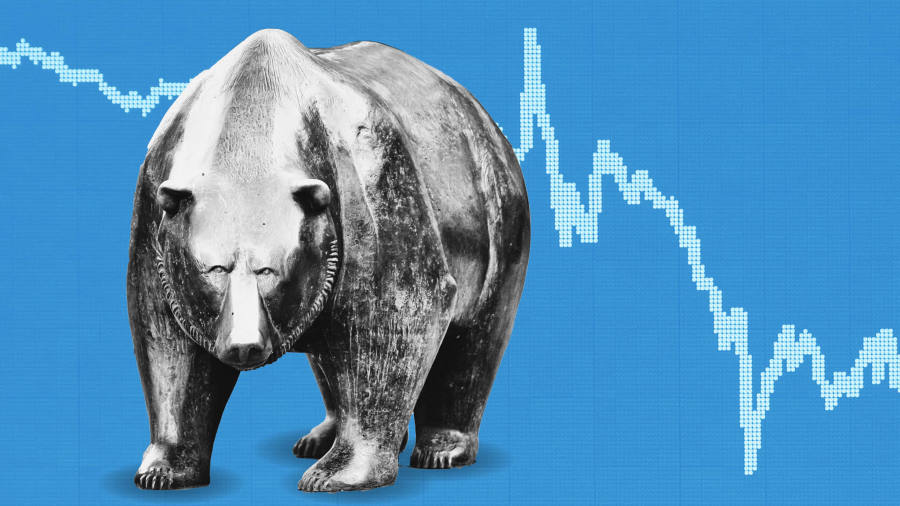 US stocks fell more than 4 per cent on Thursday, extending a sell-off to its sixth day and closing in correction territory, as pressure grew on the Federal Reserve and other central banks to cut rates in response to the coronavirus.

The S&P 500 suffered its worst day since August 2011, ending at its low for the day, down 4.4 per cent. That marked a 12 per cent decline since a peak last week — more than the 10 per cent fall that traders define as a correction.

The Stoxx 600 index of European shares had earlier dropped 3.8 per cent, leaving European markets set for their worst week since the eurozone sovereign debt crisis in 2011. London’s FTSE 100 fell 3.5 per cent.

“We’re in panic mode,” said Jim Paulsen, chief investment strategist of the Leuthold Group. “This isn’t just a temporary pullback where people are wondering whether to buy the dip, this is people not wanting to touch this.”

Goldman Sachs predicted US companies would “generate no earnings growth in 2020”. David Kostin, US equity strategist, said: “We have updated our earnings model to incorporate the likelihood that the virus becomes widespread.”

Investors increased their bets on an imminent US interest-rate cut, pushing the yield on the three-month Treasury bill down 8 basis points to 1.42 per cent — lower than the Fed’s policy rate of 1.50-1.75 per cent. Fed rate setters are due to meet next on March 17-18.

The 10-year US Treasury yield touched a record intraday low of 1.2474 per cent as a rush into haven assets accelerated. Yields fall when prices rise. The Cboe Vix index that measures volatility in US stocks hit 38, its highest level since August 2015.

“Will the Fed cut rates? It all depends on what the market does between now and at its next meeting. If the stock market drops between 15-20 per cent, they are going to cut rates,” said Scott Minerd, global chief Investment officer of Guggenheim Partners and a member of the New York Federal Reserve’s Investor Advisory Committee on Financial Markets.

Christine Lagarde, European Central Bank president, downplayed the chances of the ECB providing an imminent response to the coronavirus, telling the Financial Times the outbreak was not yet at a stage where it would require a monetary policy reaction.

Germany’s economics minister Peter Altmaier said the government was ready to provide subsidies and grants to help companies bridge short-term liquidity needs, but added there was no need for a stimulus to boost the economy.

As share and oil prices tumbled governments took some of their most aggressive steps yet to contain the outbreak.

Japan issued a de facto order for all schools to close for more than a month from Monday and Saudi Arabia halted the entry of Muslim pilgrims intending to visit the holy cities of Mecca and Medina.

On a visit to a Paris hospital where a 60-year-old man died from the virus this week, Emmanuel Macron, French president, said: “We have a crisis before us. An epidemic is on its way.”

In Iran, the country’s vice-president for women’s affairs tested positive for coronavirus as did a second member of parliament.

Investors have spent the week scrambling to price the likely economic impact of the virus, which has quickened its spread from the Asia-Pacific region across the world. The latest bout of market selling came after the US Centers for Disease Control and Prevention late on Wednesday confirmed a possible instance of community transmission of Covid-19 in California.

The CDC said it had confirmed the infection in a person who apparently had not travelled to China recently or been exposed to another known coronavirus patient. There are now a total of 33 confirmed cases in the US.

Mike Pence, the US vice-president, who is co-ordinating Washington’s response to the spread of the virus, appointed a senior health official under him to guide the work. Larry Kudlow, the White House’s chief economic adviser, and US Treasury Secretary Steven Mnuchin were also appointed to the response team.

In a sign of growing concerns about the spread of the health crisis outside of China, Facebook cancelled F8, its annual developer conference held in California.

The decision came a day after the World Health Organization said that new cases reported outside China had exceeded those within the country for the first time.

Mohamed El-Erian, chief economic adviser for Allianz, said: “What is urgently needed is a circuit breaker.” He added this would ideally include a medical development “that provides confidence that the spread of the virus worldwide is rapidly containable and highly reversible”.

Moves in Asian stock markets were more measured, although Japan’s Nikkei significantly underperformed as it fell 2.1 per cent.

Read more about the coronavirus impact

Subscribers can use myFT to follow the latest ‘coronavirus’ coverage