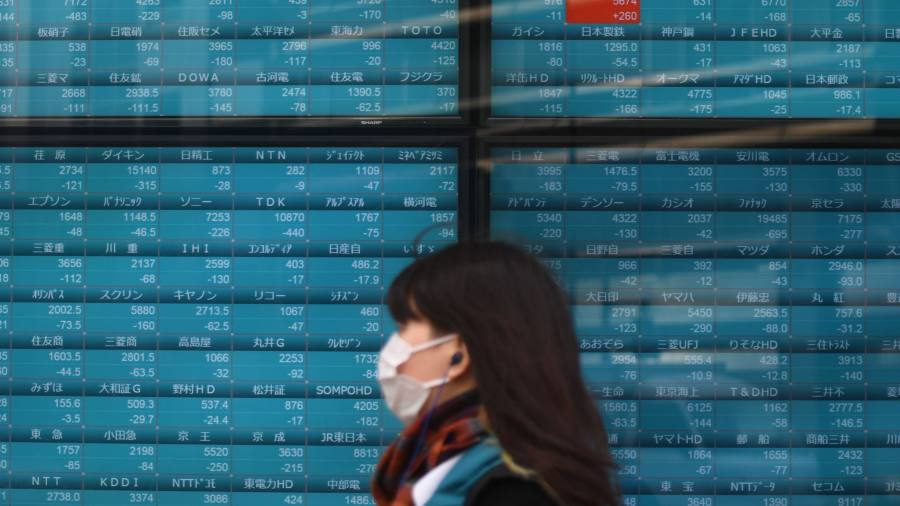 Global stocks were headed for their worst week since the 2008 financial crisis as Asia-Pacific markets sold off for a seventh day on coronavirus fears with shares in Tokyo following Wall Street into correction territory.

The MSCI World index was down 9.4 per cent for the week on Friday, the worst performance since November 2008.

Japan’s Topix stock index tumbled 3.7 per cent, while Australia’s S&P/ASX 200 and South Korea’s Kospi both shed 3.3 per cent, bringing the three benchmarks down more than 10 per cent from their most recent highs in February.

FTSE 100 futures pointed to a 3.1 per cent fall when trading in London begins, while S&P 500 futures suggested a drop of 0.8 per cent when Wall Street opens later on Friday.

The latest brutal sell-off in the region came after the S&P 500 closed more than 4 per cent lower overnight, extending the US stocks slump to a sixth day.

Global markets this week began waking up to the threat of the virus as it spread beyond Asia, where stocks had already dropped sharply in China and other countries.

Now fears of economic disruption and a steady stream of news on outbreaks across the globe are forcing traders to grapple with the prospect of an imminent pandemic, driving Asian equities lower still as outbreaks in Japan and South Korea pile more downward pressure on those countries’ stock markets.

Traders are fretting that the deadly coronavirus, which has spread from China to countries including the US and in Europe, the Middle East and elsewhere in Asia, could slam the global economy this year.

Oil prices fell further on Friday with Brent crude, the international benchmark, dropping 2.7 per cent to $50.75 a barrel. West Texas Intermediate, the US marker, dropped 3 per cent to $45.70, its lowest level in more than a year.

Traders are now almost certain that the Federal Reserve will be forced to cut interest rates in March to head off any economic slowdown owing to the spread of the virus, according to Fed funds futures on Friday.

Traders in Asia were keen to sell on concerns that the weekend would bring more bad news on the outbreak, he said, which analysts think could hit global economic growth this year.

Health authorities in China reported 44 new deaths from coronavirus to the end of Thursday, up from 29 a day earlier, taking the total fatalities in the mainland to 2,788. There were 327 new infections recorded, against 433 on the previous day, bringing the total to 78,824.

JPMorgan’s Mr Hui said that markets in Japan and Korea were slammed by concerns over domestic outbreaks, but he added that Asian equities were also better poised for a recovery — whenever that arrives — than other markets.

“The room for policy stimulus is much more plentiful in this part of the world . . . both in terms of rate cuts by central banks and fiscal stimulus,” he said.

Read more about the coronavirus impact

Subscribers can use myFT to follow the latest ‘coronavirus’ coverage