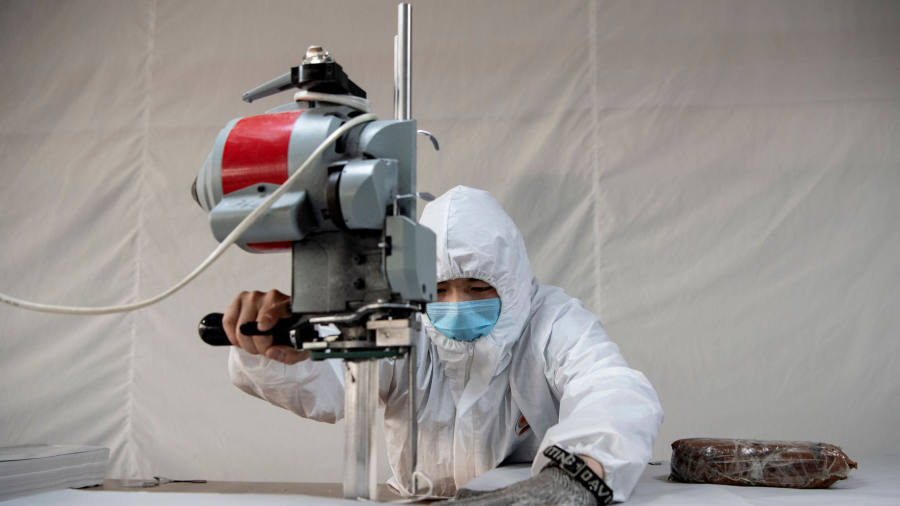 Manufacturing activity in China plunged in February, exceeding its collapse during the global financial crisis of 2008, according to one of the first official economic indicators published since the coronavirus outbreak.

The manufacturing purchasing managers’ index (PMI) fell to 35.7 this month, which was an all-time low and was down from 50 in January, China’s National Bureau of Statistics announced on Saturday. A figure below 50 indicates a contraction in activity compared with the previous month, as judged by the managers who fill in the PMI survey.

“Today’s PMI data suggest that things are really bad, and the government is willing to report that,” wrote Larry Hu of Macquarie Capital in an analyst note.

Mr Hu warned that gross domestic product growth in the first quarter would be worse than the analysts’ consensus forecast of about 4 per cent year-on-year. He added the government might even report a contraction for the quarter, which would be the first time since the Cultural Revolution.

February’s PMI reading was the lowest since January 2005, when the index was first released. The previous lowest was 38.8 in November 2008, during the financial crisis.

Local officials face two conflicting objectives. They must control the outbreak, which has killed 2,835 people in China, and also get the country back to work after the extended lunar new year holidays, when most of the migrant workers upon whom China’s factories depend return to their rural homes.

While the NBS announced that medium-to-large sized enterprises had a “work resumption rate” of 78.9 per cent, banking group ANZ said it they were probably operating well below this in terms of capacity utilisation.

Based on migration data, ANZ said the Chinese economy was operating at 20 per cent of capacity, with about 50 per cent of workers back at their posts as of this weekend.

The new export orders sub-index dropped to 28.7, down 20 points from the previous month, because of cancelled and delayed orders as a result of the coronavirus, said Zhao Qinghe, NBS senior statistician.

Mr Zhao added that the work resumption rate was rising rapidly, and would lead to an increase in the PMI for March.

Although some city governments have chartered planes, trains and buses to get their rural migrant workers back to the cities, many are unwilling or unable to return due to quarantines and roadblocks imposed by other local governments afraid of contagion.

Apple has issued a revenue warning because of the outbreak. Its contractor Foxconn assembles iPhones and other Apple products in China.

Foxconn’s biggest iPhone plant has struggled to return to full production because of housing problems for workers in need of quarantine. Foxconn and other manufacturers often house workers on-site in large dormitories.