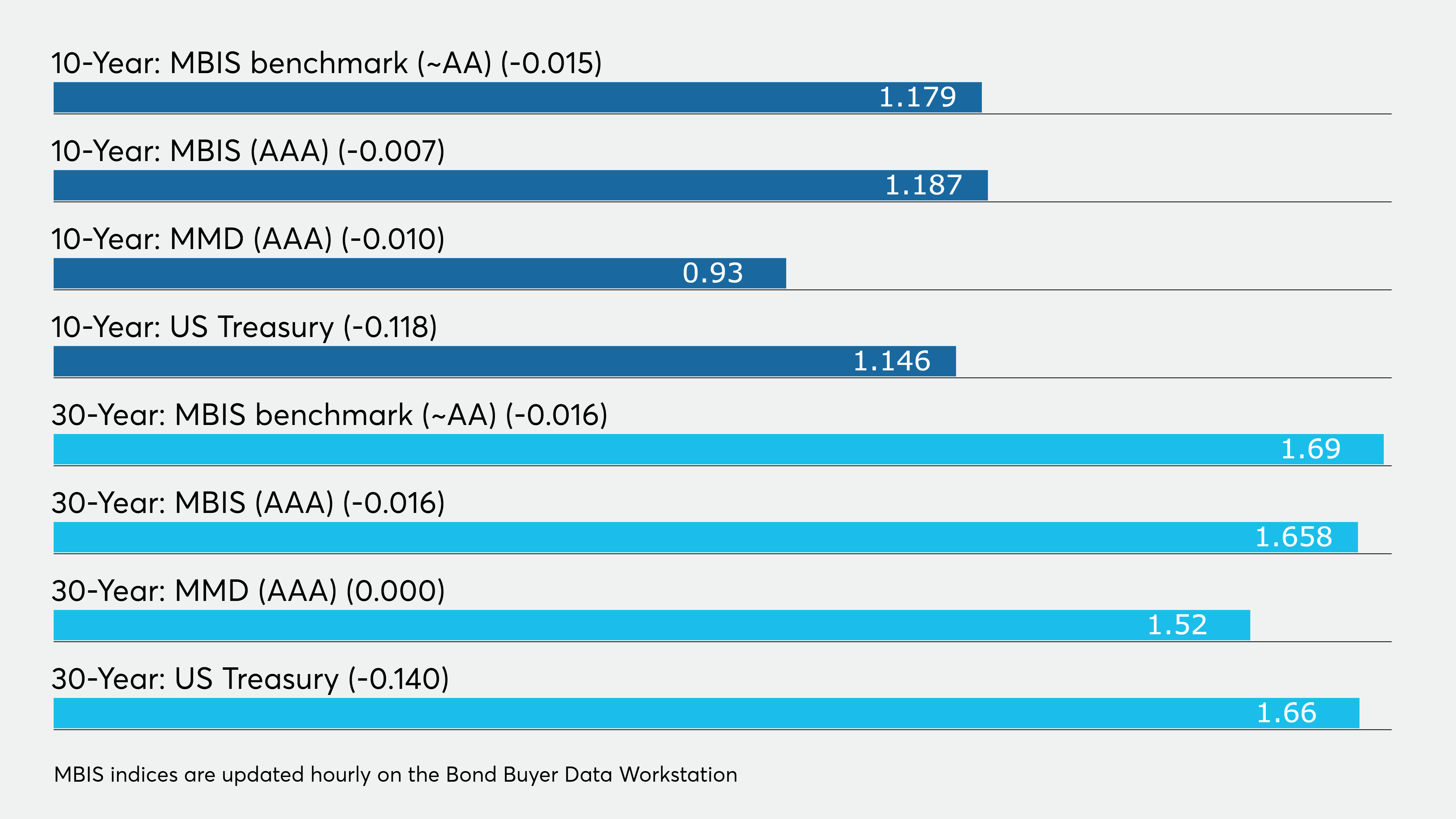 With each passing day, fears surrounding COVID-19 elevate as the equity sell-off pressed on for the seventh day on Friday. The biggest winners have and will continue to be muni issuers, as they can sell debt at historic lows and participants don’t see the movement slowing.

COVID-19 has pushed benchmark muni yields down to record lows numerous times in the month of February, resulting in the largest February in terms of issuance to date, going all the way back to 1986, the furthest back Bond Buyer data tracks.

“Munis have been and always will be undervalued as an asset class,” said Dan Heckman, senior fixed-income strategist at U.S. Bank Wealth Management. “Although, we could get some buyer resistance if Treasury yields keep dropping, resulting in munis underperformance”

Heckman noted that in his eyes, the value continues to be further out on the yield curve, with the short-end being too expensive and not rewarding enough. He also added that the primary market might be “getting a little ahead of itself.”

“People are getting a little less comfortable about getting too aggressive,” he said. “I can see some resistance from the standpoint of when you get yields well below 1%, it starts to get unattractive.”

With so much uncertainty surrounding COVID-19, no one knows how long this will last for and nothing lasts forever, so Heckman has a hunch that smart and savvy issuers will not be sitting on their hands.

“If issuers have been on sidelines, they should get off the sideline and strike while the iron is hot,” he said. “The rubber band is getting stretched pretty far and at some point we will see some snap back.”

The Big Apple is also selling $500 million of taxable GOs in the competitive market, also on Wednesday.

Staying in the competitive arena, Maryland (Aaa/AAA/AAA/ ) and its top-tier ratings is scheduled to sell a total of $779.27 million of GO and taxable GO bonds in four separate sales.

Stocks are having the worst week since the 2008 financial crisis. The market selloff is now on its seventh day as the COVID-19 the virus continues to spread rapidly across the globe and country. Fed Chairman Jerome Powell said that the Fed is “closely monitoring” the COVID-19 situation and will act “as appropriate.”

“The market is frankly way, way ahead of the Fed,” Heckman said. “I am in the camp where I am not advocating for a rate cut, but at this point they should probably do it.”

To Heckman’s point, the market is currently forecasting a greater than 50% chance that interest rates will be cut at the next Federal Open Market Committee meeting March 17 and 18. 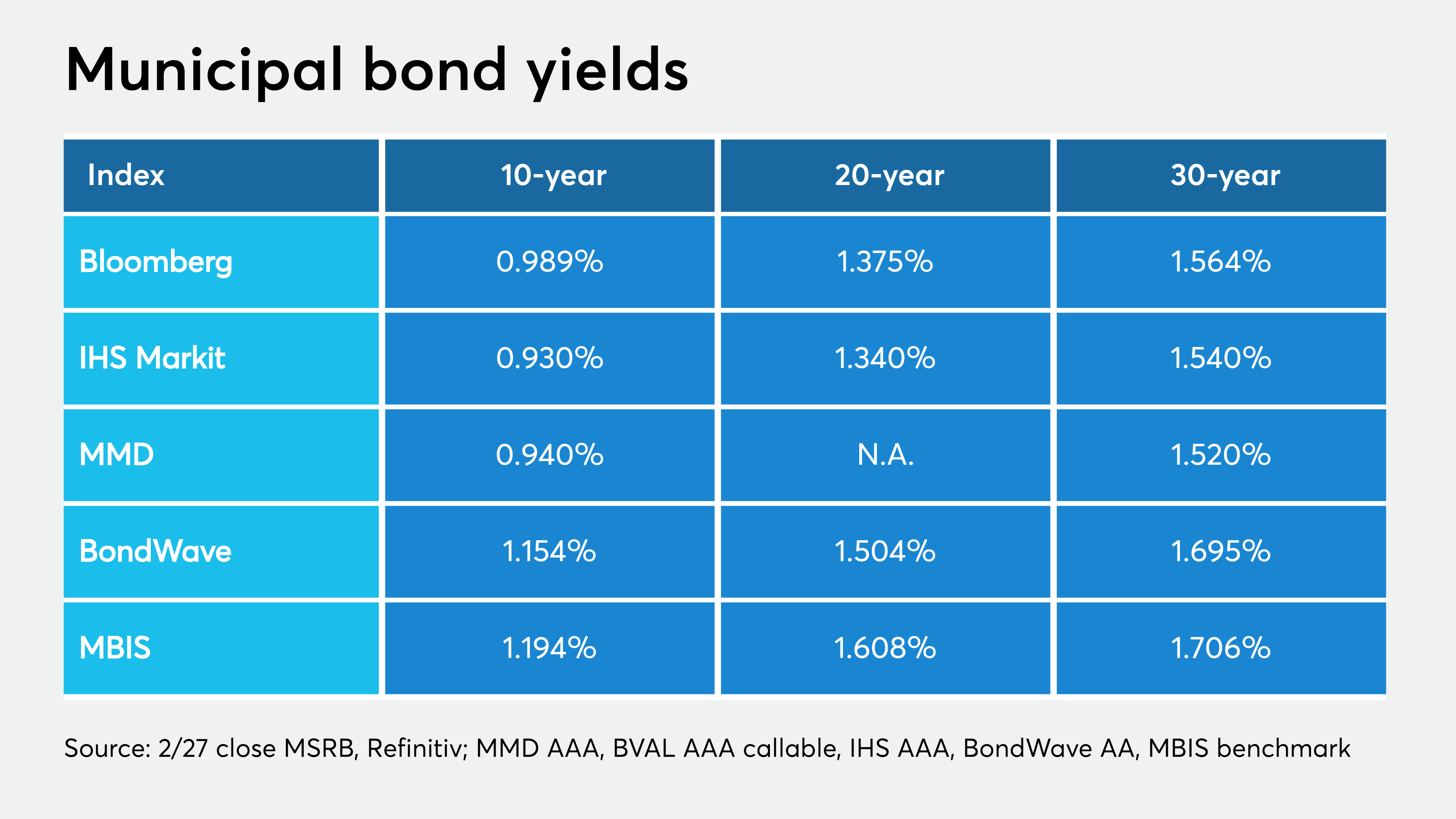 Lipper reports 60th week of inflows
For the 60th straight week, investors keep pouring cash into the municipal market continuing the streak as the money flowing into cash-exempt mutual funds.

In the week ended Feb. 26, weekly reporting tax-exempt mutual funds added $2.266 billion of inflows, after inflows of $1.767 billion in the previous week, according to data released by Refinitiv Lipper late on Thursday. 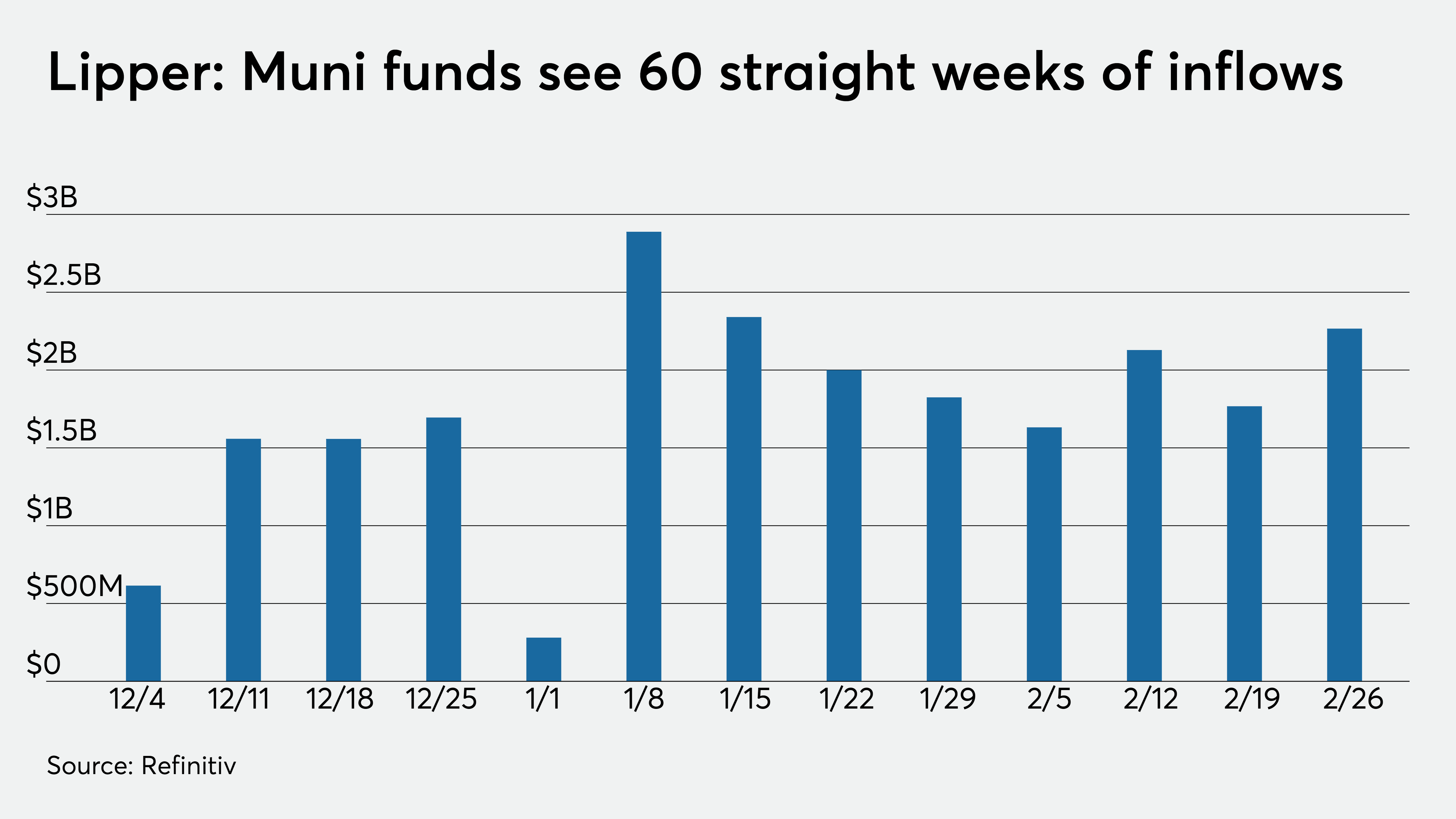 The four-week moving average remained positive at $1.948 billion, after being in the green at $1.838 billion in the previous week.

Data appearing in this article from Municipal Bond Information Services, including the MBIS municipal bond index, is available on The Bond Buyer Data Workstation.