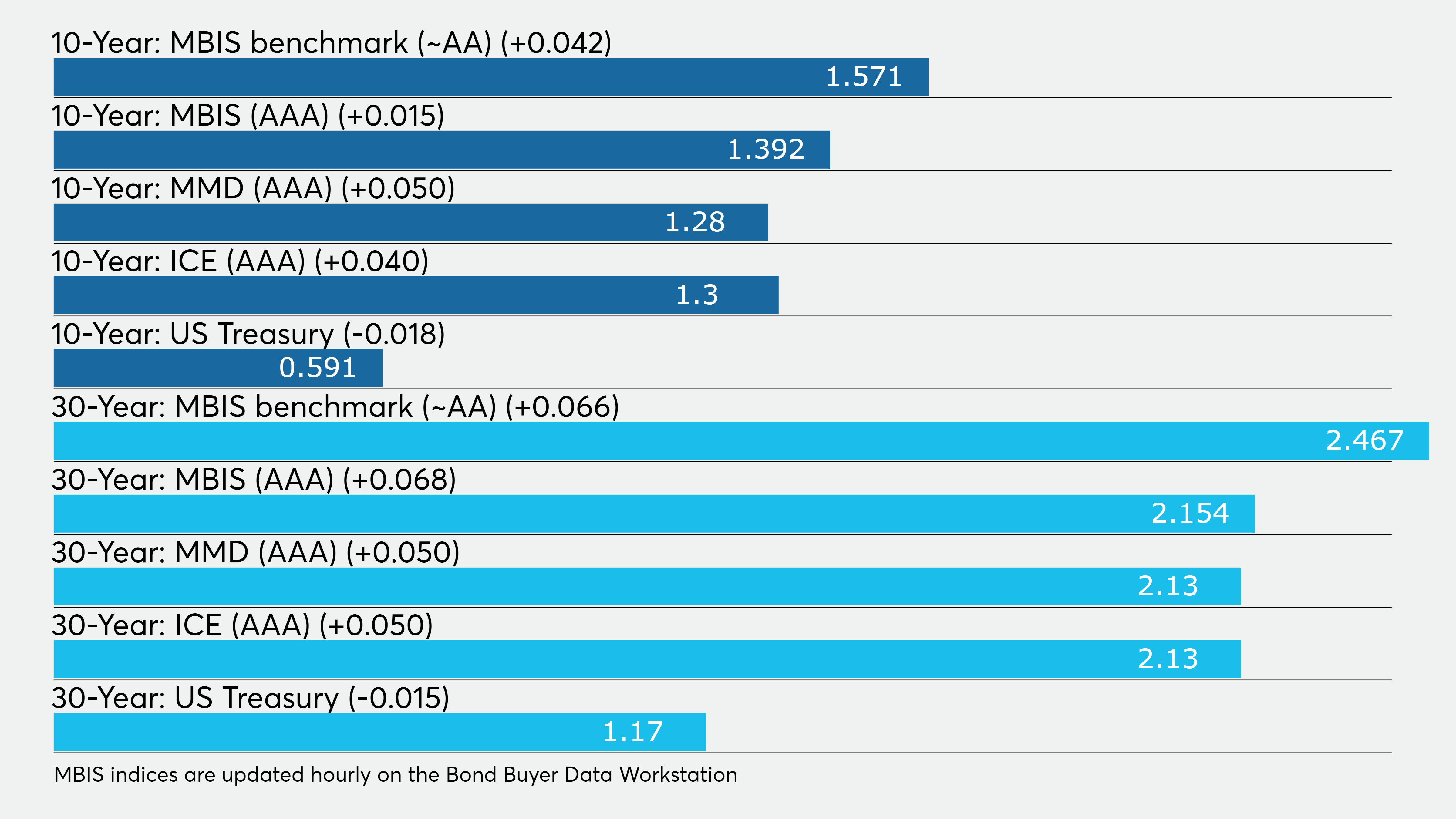 The secondary muni market was dislocated Friday with high-grade block trading showing swings in yields and rate volatility and price discovery remain problematic for investors and issuers alike. After a week of large issuers bringing sizable deals, Friday did not fully commit to a more stabilized muni market.

The news out of Washington did not help as headline risk clearly had participants questioning direction from D.C. on policies affecting the municipal market.

Triple-A benchmark yields rose by about five basis points across the curve.

Collin Texas Community College 4s of 2038 were at 2.22% after originally selling during the earlier weakness in the month at 2.52%.

Meanwhile, the largest scheduled deal for week of April 27 is the $700 taxable corporate CUSIP offering coming from Advocate Health and Hospitals Corp. (Aa3/AA/AA/NR) in Illinois for the Advocate Aurora Health Credit Group. JPMorgan Securities is set to price the bonds on Tuesday.

However, there are signs of more stability, but participants noted that patience and caution will be needed.

“The market is slowly and deliberately gravitating back toward levels that offer a wider swath of buyers more enticement as fragile conditions still exist,” said Kim Olsan, senior vice president at FHN Financial. “Generic yields are within range of trading back to their April medians—10 year at 1.32% (reaches a 2% TEY there) and 30 year at 2.11%.”

Rate volatility is still evident on the buy side of the municipal market as bid wanted lists reflect redemptions or portfolio restructuring by investors, according to Jim Colby, senior municipal strategist and portfolio manager at VanEck.

Though yields have declined from the sell-off earlier this month, Colby said there is concern on the part of the investment community as the market continues to adapt to the pandemic climate.

“Our market is still on the fragile side of normalcy,” he said in an interview Friday morning.

Concerns range from rising unemployment, the economy, and the Fed assistance plans, to the new issuance, liquidity, and credit quality, according to Colby. The over 26 million Americans receiving unemployment, for instance, is impacting the municipal market.

“When you take potential investors out of the market, meaning the marginal buyer of munis might well be filing for unemployment insurance, the revenue that goes to supporting the credit quality of issuers is eroding,” Colby explained.

Strategies, from buying individual high-quality bonds to investing in exchange-traded funds, are being used but, overall, there is uncertainty plaguing the marketplace, Colby said.

“That leaves some question marks in the minds of investors as to where, if anyplace, to dip one’s toes into the muni space,” he added.

“I think there’s still discovery being made by advisors to individual investors where to be on the curve, and what type of bond is going to serve the client well for the next several months,” he said.

“That answer is multifaceted, is up in the air, and depends how much more time the country is spending at home,” Colby added.

Technically, the municipal market is in good shape, he said given there is still a lack of new issuance coming to market to meet the corresponding demand.

Issuance remains on a day-to-day basis as issuers are concerned about taking on additional debt, even if it’s authorized, Colby said.

“Issuers are being pretty cautious,” he said, adding that issuers with project finance or revenue-based financing are contemplating how long it will take the economy to get back to “equal footing to support toll roads and airports” and other revenue sources.

“That gives the market a fairly good technical footing going forward, but on the basis of significantly muted activity,” Colby said. “Great uncertainty overhangs this market and is weighing on both the investment side and the issuer side.”

Colby said he remains active in the municipal market as he responds to ongoing redemptions and maintains overall portfolio restructuring for the exchange-traded funds he manages. “We are constantly rebalancing the portfolios to ensure they are properly aligned,” he explained. “We are active, but we are not as much under the gun to put money to work as we had been prior to March.”

“We’re not seeing a great deal of cash flow coming in, but it’s no less important for us to maintain proper balance in the portfolios, which happens on a monthly basis.”

Meanwhile, dealers, according to Colby, have indicated they want to provide liquidity in the current market.

“That plays into the cautious nature of this market going forward and the reluctance to commit on both sides,” he added.

On the issuer side, while most states have reserves and rainy day funds, large states, like California, would use up their funds in a shorter time frame than smaller states, Colby noted.

“There is a point in which we could then use ‘critical’ to describe the impact on the marketplace, but we are not there now,” he said.

Colby said the municipal market can get through the summer and be able to “start to crawl our way back to some semblance of normalcy — going back to stores and using services and buying goods.”

“It will take some time,” he said.

Despite the uncertainty, and the pending federal government assistance plan earmarked to municipalities, the municipal market has performed relatively well amid the virus-induced climate.

“Our market keeps on ticking during this pretty extraordinary time,” he said, saying the COVID-19 crisis’ impact on the municipal market is one of the most invasive he has seen in over a decade.

“It is far more corrosive than the financial crisis in 2008 and 2009,” he said. “That was limited in its scope, not to diminish the damage it did, but it wasn’t the breadth and depth of what’s happening now.”

“We have stopped the economic engine in its tracks and the longer it goes on the greater the impact it’s going to have for our community,” he said.

Lipper reports back-to-back inflows
For the second week in a row, investors put cash into the municipal market after six weeks of outflows.

In the week ended April 22, weekly reporting tax-exempt mutual funds saw $73.844 million of inflows, after inflows of $833.388 million in the previous week, according to data released by Refinitiv Lipper late on Thursday. 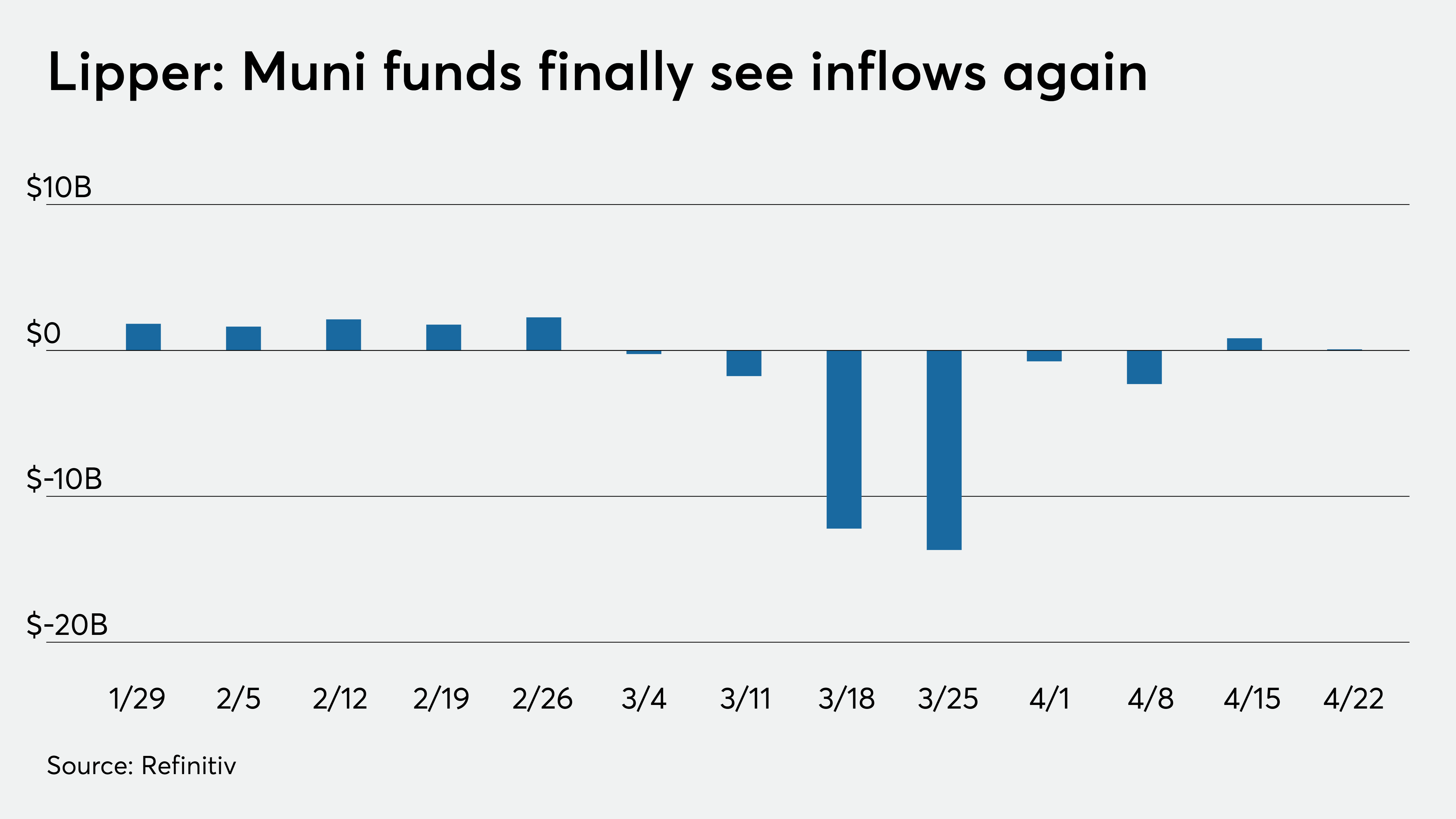 “Fund flows are reported by ICI and Lipper show rebounds into the positive in the last two weeks,” said Olsan. “The hemorrhaging during March is still well away from being reversed, but the momentum into funds is a supportive factor for distribution.”

She noted that net demand as measured by forward supply (currently $16 billion) against redemptions ($22 billion) points to something constructive as yields move higher.

This period a year ago saw the 10-year AAA benchmark trading about 70 basis points higher on net implied demand that was larger than the current figure. One aspect that got overlooked in the last month or so was the usual tax cycle focus. As most state’s July 15th extension approaches there could be greater attention on using the muni tax-shelter and likely to grow larger for those states that will be forced to raise income tax brackets.”

The four-week moving average was negative yet again at $537.077 million, after being in the red at $3.975 billion in the previous week.

Stocks were positive as Tresuries were mostly lower.

Primary market
The biggest scheduled deal of the week is the $700 taxable corporate CUSIP offering coming from Advocate Health and Hospitals Corp. (Aa3/AA/AA/NR) in Illinois for the Advocate Aurora Health Credit Group. JPMorgan Securities is set to price the bonds on Tuesday.

“Upcoming deals include $930 million NY MTA and $1.1 billion NY Powers — certainly market drivers beyond just New York-based commitments,” Olsan said. “The Power Authority was last in the market with a small $69 million deal in 2015 and its draw will be a more unique name and could lend support to that sector of the market.”