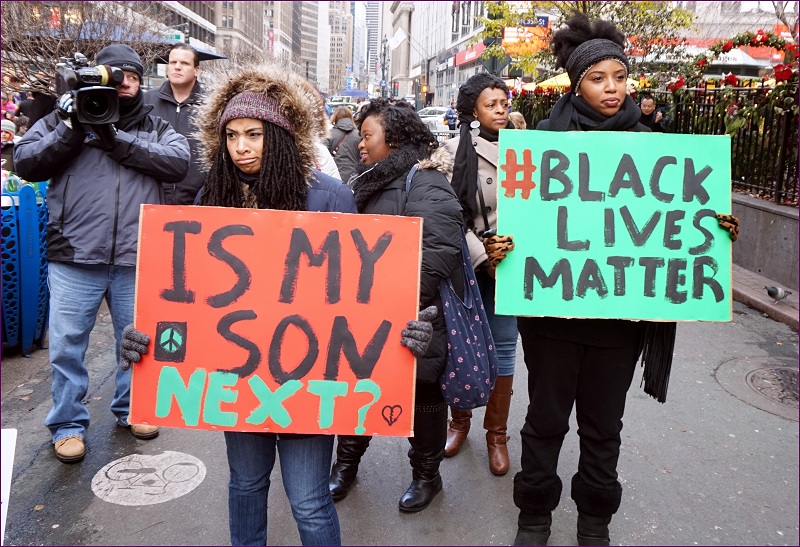 Violence has always been the main theme in most videos involving Black Lives Matter proponents. However, not this time. A video has gone viral, showing a man standing up to a bully trying to berate a neighbor who had a Black Lives Matter flag on their lawn.

Ian Doherty is the man at the center of an altercation that has gone viral on standing up to a woman who tried to scream, “White Lives Matter” during an altercation involving other neighbors. The altercation, which lasted close to 30 minutes, was apparently triggered by a Black Lives Matter flag visible than the American flag in one of the neighbor’s yard.

Doherty can be seen walking towards the woman and asking her to stop yelling at other neighbors. Five minutes into the argument, the woman snapped. Afterwards Doherty grabbed a sprinkler on the yard and started drenching the woman’s car that was parked in the middle of the road in the hope it will get the yelling woman to walk away.

The woman did not walk away but started chasing Doherty, who at this time had stopped drenching the car and focused the sprinkler on the woman. Doherty can be seen spraying and soaking the woman as she slipped in the curb several times.

Doherty can be heard telling the woman to get off his property which she does not do but keeps on following the man. The incidence only comes to an end when Doherty turns off the water and hands the woman the sprinkler.

Sensing defeat the woman can be seen walking back to her car. As the woman walks back to the car a woman can be heard saying in the background that had she approached her with kindness she would have responded much better. The Austin police responded to the incidence but no charges were leveled against anyone.

The whole incidence was captured on video and has since gone viral garnering close to 8 million views on TikTok. The video has more than 72,000 views on Facebook and 15,000 up votes on Reedit.

Standing Up For Bullies

In an interview, Doherty says he was never going to turn off the sprinkler even as the woman charged towards him and tried to force him to do so. “I am on my property and she was being ridiculous and abusive saying the worst things for half an hour. I am not going to back down on my property.”

While the whole altercation was going on, one of the neighbor can be heard saying “ Go home girl, you’re going to lose that battle.

Doherty says he was surprised to see the incidence go viral after taking more than ten days to post the video calling it an ugly and embarrassing episode. He goes on to say that people need to stand up against any kind of bad behavior, bullies, and racism.

“I’m not making any attacks against the woman, but she was being antagonistic and a bully, for sure. I heard her scream ‘white lives matter,’ and just being ugly in general” added Doherty.