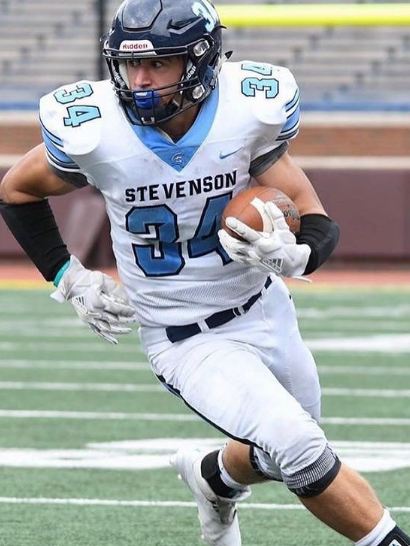 This is the moment a senior running -back for Livonia Stevenson High School in Michigan became the talk of social networks, after a video of him lip-syncing Justin Bieber and Sean Kingston hit Eenie Meenie went viral. The moment captured shows Caden Woodall grinning from ear to ear while singing along to the song.

It’s the moment he jumps into a dance party followed by teammates for the chorus that appears to have lit social networks. The video blew up on viral video-sharing app TikTok, with the hashtag #number7 and #cadenwoodall. The video has already been viewed more than 42.5 million times.

The video went viral in part because it shows high school athletes having good times in a year that has had its fair share of ups and downs owing to COVID-19 disruptions. For Woodall, he deserves all the hype on social media as he has had an outstanding year, having eclipsed 2,000 rushing yards despite the season being shorter than usual.

Originally posted by Alex Hampstead, the video had to be pulled down following a school request. According to Hampstead, he can no longer post-school sports-related videos until she meets the school next week. However, it has since emerged that the school was pushing for the removal of the video because the players captured dancing to the Eenie Meenie songs were not wearing masks.

Amid the school’s restrictions, Woodall, now going for the name ‘Number Seven,’ opted to create his own TikTok account. He has since posted his first video lip-syncing the Bieber song, but this time on a golf cart. The video has already garnered more than 19 million views affirming his growing celebrity status in the viral video sharing app.

TikTok users and fans have already echoed their support for the special media sensation, with some insisting he deserves all the hype he can get. Others, perhaps out of jealousy, are calling on Woodall to leave some girls for them.

Woodall’s rise to stardom does not come as a surprise. Jared Purcell, a sports reporter, has already written about him in the past, terming him a pretty humble kid who deserves all the best there is.

Woodall’s rise to stardom with the viral TikTok video has also come with its fair share of rewards for Purcell. After carrying out an analytics check on his page view, the writer has noticed that some of the stories about Woodall are skyrocketing when it comes to views.

Even on rising to stardom, Woodall remains focused on his studies as well as a career as an athlete. In his Twitter account, he insists on going to Harvard and playing Football as part of the class of 2025. While he did receive offers from Princeton and Yale, Harvard remains the preferred destination where Woodall intends to pursue biomedical engineering.