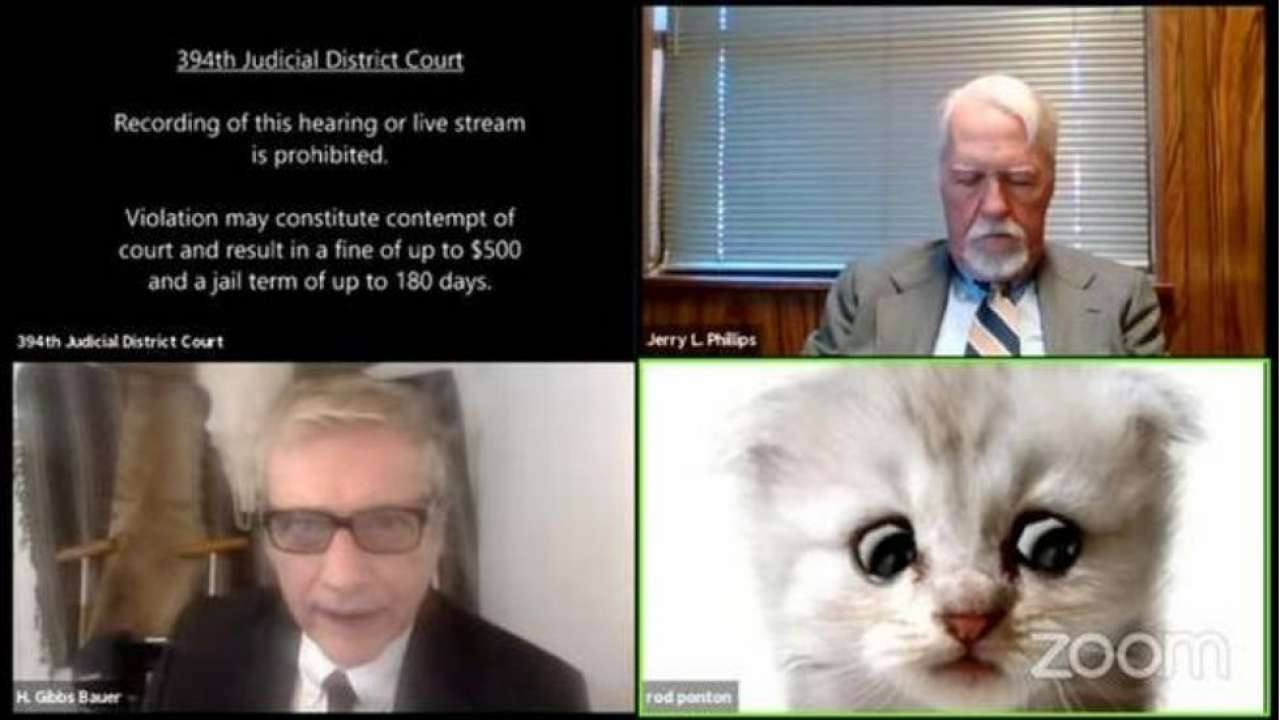 This is the viral moment when a Texas lawyer turned up to argue a forfeiture case but struggled to remove a filler of a kitten on the Zoom call. Rod Ponton is the county attorney who sent shockwaves on social networks for struggling to turn off the filler during a hearing in the Texas 394th Judicial District Court.

The video has since gone viral shared across social networks as an instant classic. The video offered the much-needed laughter at a time when most people are experiencing rough times owing to the COVID-19 shackles.

Judge Roy B Ferguson was the presiding judge when he noticed that Ponton had been replaced by a white fluffy kitty on the zoom call. He, later on, posted the short video on YouTube and Twitter triggering a frenzy of comments.

In the video, the judge can be heard saying “Mr. Ponton I believe you have a filter turned on in your video setting.” In response, the cat can be seen flicking its eyes up and down scanning for the necessary tools to correct the mess. Ponton can then be heard saying “Can you hear me, Judge”

The best part of the video which has since been shared by thousands of people is that of the kittens’ mouth on the Zoom call seen moving up and down as Ponton spoke. In the short video, the county attorney acknowledges that it is indeed filler but does not know how to remove it.

Ponton has since been dubbed as the cat lawyer thanks to the viral video. In an interview with Vice, the lawyer says he was using her assistant’s computer which for some reason had the filler on. According to the judge perhaps it is the assistant’s child that left the filler on. He Tweeted

IMPORTANT ZOOM TIP: If a child using your computer, before you join a virtual hearing check the Zoom Video Options to be sure [sic] filters are off. This kitten just made a formal announcement on a case in the 394th (sound on).”

The viral zoom video in Texas has since been heralded as an instant classic matching the likes of Knife Kid and BBC dad. Though less than a minute long, its comedy unfurled signifying how it’s the little things that make life worth living.

Ponton who is not on Twitter has become an international phenomenon getting calls from media outlets looking for interviews. The light moment in the courthouse acted as a perfect distraction from the second President Donald Trump impeachment which has seen manager’s air videos of protesters storming the Capitol Hill building.

On tweeter user can be seen saying “Just had the emotional roller coaster of watching the impeachment video followed by the lawyer with the cat filter,”

This is not the first time that the ‘cat lawyer’ has graced screens on the international scene. In 2019, he appeared in the final episode of the Netflix Series the Confession Killer. In the episode, Ponton represented Henry Lee Luca who confessed to more than 600 murders in the 1980s.