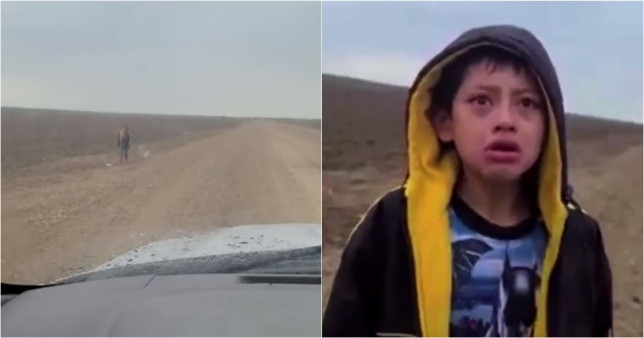 A heartbreaking video of a ten-year-old migrant boy wandering alone in Texas near the border has gone viral. The video released by US Customs and Border Protection shows the boy from Nicaragua walking in the rural caliche road in Texas after reported being abandoned by a group of immigrants that had crossed into the US.

A Border Patrol agent found the boy wandering in a road on a rainy day in La Grulla near Rio Grande City north of the Mexico-Texas border. In the translated video the boy is seeing pleading for help from the agent, saying that he was with a group of people that left him behind. The boy says in Spanish as the customs agent approaches, “can you help me?”

When the agent asks him what happened the boy explains that he was with a group of immigrants to turn himself in to authorities, but they left him behind, and he is looking for help. The boy explained that he came looking because he didn’t know where else to go and he was afraid of being kidnapped or robbed. The shaken boy said that that he didn’t know where the group that dumped him is, and he was just scared.

A friend of the Border Patrol agent posted the video on Facebook, where it went viral. US CBP also confirmed that the video was authentic. CBP confirmed in a statement that the video was captured on the morning of April 1, on a remote road outside La Grulla in Texas. The Nicaraguan boy confirmed that he was traveling with other 80 people and only woke up to realize they had left him behind. Authorities later apprehended the group.

The boy was taken to the Dona Border Patrol facility, and his family contracted. CBP said that he was medically screened and fed, and they will transfer the boy into the Department of Health and Human Services’ custody. CBP spokesperson stated that scenes such as these are too common at the border, with smugglers abandoning children in deserted places without regard for their welfare.

Cases of smugglers abandoning children at the border on the rise

In recent weeks there have been similar videos of smugglers leaving behind children at the US-Mexico border. This includes one where a toddler and a five-year-old being dropped from a 14-foot high wall. In February, authorities found over 9,000 children crossing into the US without patents which is the highest in a single month since May 2019 when border agents found over 11,000 unaccompanied children at the border.

The recent events occurred as the spotlight has been turned to the border issue, especially on dealing with unaccompanied children. The current Biden Administration has requested various cities such as Long Beach to offer temporary shelter for unaccompanied children as it seeks to address the immigrant crisis.